Harpsichord solo (announced during the concert) 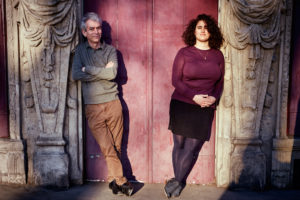 Born in 1992, Lillian Gordis discovered the harpsichord at the age of 9. At Pierre Hantaï’s encouragement, she moved to France at 16, where she was his private student from 2009 to 2013. She was also mentored by Skip Sempé and Bertrand Cuiller. In 2018, she received a master’s degree in performance, summa cum laude, from the Université Paris-Sorbonn and the Pôle Supérieur de Paris-Boulogne.
She has been an invited soloist on France Musique’s radio show, Génération Jeunes Interprètes, and regularly performs as a soloist in festivals in France, across Europe and the United States. She plays in a duo with Jérôme Hantaï and maintains regular chamber music engagements.
Lillian is a four-time laureate of the Fondation Royaumont (2013, 2015-2017) and is supported by the Fondation d’entreprise Safran. Her first solo album, Zones, dedicated to sonatas of Domenico Scarlatti, was released in 2019 for Paraty (Harmonia Mundi-PIAS).

Born in 1961, Jérôme Hantaï studied the viola da gamba with Wieland Kuijken at the Brussels Conservatory. Alongside this, he took a keen interest in early keyboard instruments, especially period pianos.
During his studies, he gave numerous concerts on both viol and piano, and collaborated with pioneers in the renewal of early music, including Sigiswald Kuijken, René Jacobs and Jean-Claude Malgoire. He was also associated from the start with the adventure of the Orchestre Baroque d’Île de France and the Ensemble Orlando Gibbons in the 1980s.
Above all, however, he is a member of the Trio Hantaï, with his brothers Marc (transverse flute) and Pierre (harpsichord), an ensemble that has acquired international renown. In addition, since 2001, Jérôme Hantaï has directed his own ensemble, Spes Nostra, and played in the Trio Almaviva.
A sought-after soloist, he has appeared throughout Europe and in the United States, and travels to Asia for tours, notably in China, India, Japan, the Philippines, Taiwan and Cambodia. Finally, he also devotes a large part of his activity to teaching, at the Conservatoire à Rayonnement Régional de Cergy-Pontoise and in masterclasses. He plays in a duo with Lillian Gordis since 2018.
His many recordings include an anthology of folksong settings by Beethoven and a programme of keyboard trios by Haydn (Naïve), three volumes of ‘Pièces à une and plusieurs violes’ by Marin Marais (Virgin Veritas), a programme of pieces by John Jenkins entitled ‘Fantazia’ (Naïve/Ambronay), and ‘Consort Music au temps de Shakespeare’ (Musicales Actes Sud). All of these CDs have received critical acclaim. Jérôme Hantaï’s album of piano sonatas by Haydn and Mozart was just released on the label Mirare (2019).